This article is a simple starting point to a very intricate knife. If you want a complete guide, with every aspect and manufacturer examined in depth, this is THE BEST book to buy:

I have decided to write this article because Hitler Youth, (HJ) knives commonly are the first and most affordable way to start collecting German Edged Weapons. Millions of these were produced between 1933 and wars end. Today they remain relatively affordable and as a result, are often the first dagger purchased by a beginner. During this period, scores of producers, somewhere around 150, were awarded contracts to produce this knife and as a result, there are many variants out there. Hitler Youth knives are widely reproduced and they are a minefield for experienced collectors and even more so for the beginner. The best advice I can give the beginning collector is to buy their first knife from a trusted source preferably a certified dealer who offers a lifetime warranty as to authenticity and an inspection period. This is a very small investment in the hobby. The most common mistake I see is a newbie buying his first dagger from an auction site or at a gun show trying to save a few bucks. I don't know how many times I have seen new collectors throw in the towel after getting taken on their first purchase! Experienced collectors buy from dealers that alone should say something! When holding a known original in your hand many of things I am going to speak about here will come clear. There are very few absolutes when collecting German edged weapons and even fewer when one starts talking about HJ's. This article will provide a list of clues helping you determine authenticity. Please keep in mind they are only clues and one has to look at the entire piece to determine authenticity. Do not write off a piece when you come across the first questionable feature. I do not claim it to be 100% complete, and I have not seen it all, however this should provide enough information to help beginners avoid the most common pitfalls. 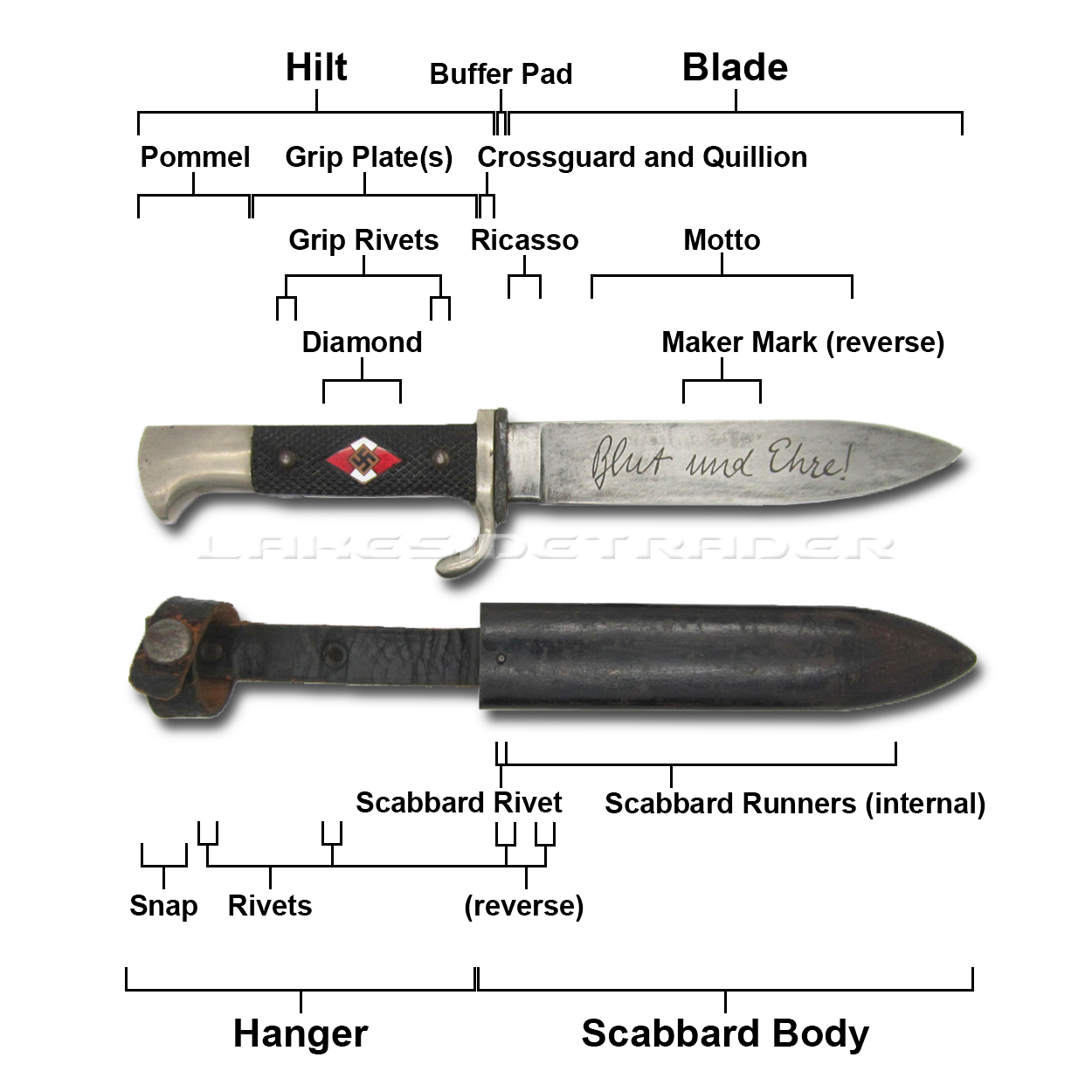 Determining the Period of Manufacture

There are 3 basic configurations for these knives depending on the period of production. Generally speaking Transitionals are considered the most desirable and the late period RZM's the least. Listed below are characteristics that will help one determine the period of manufacture.

The first thing I look for when purchasing an HJ is uniform, normal, period wear to the whole piece. Mint daggers that look like they just came out to the factory yesterday, more often than not, did! There is no better advice I can give you than to start by collecting knives that have honest wear. This just can't be faked. 99.9% of originals display normal wear to the hilt plating, an aged look to the leather, scratches to the scabbard and wear to the blade. When I say uniform I mean that you should not see a mint scabbard and a beat up knife. All components should display relatively the same amount of wear. We need to keep in mind that these knives are 70+ years old and were handled by kids! They were used and abused! Remember your Scout knife.... Sticking with these pieces to start with will save you much heartache. 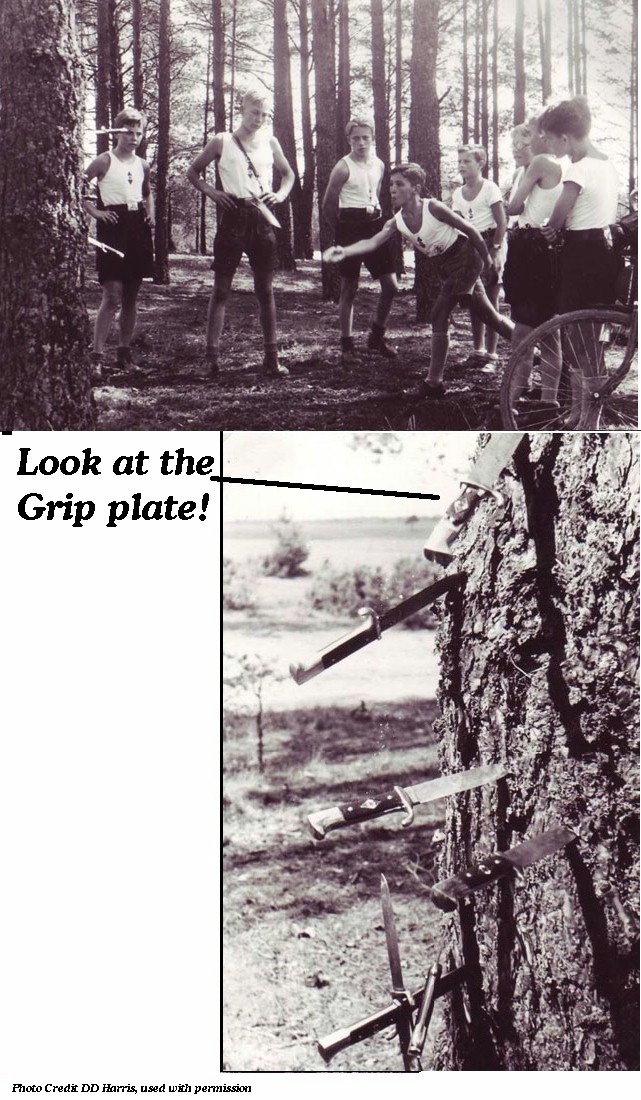 This is the first place I look. All Hitler Youth scabbards are made of formed magnetic sheetmetal, no other material was used during the period. All these scabbards are magnetic. If you run across a nonmagnetic scabbard keep running! The biggest red flag when looking at these scabbards is to look for a lip on the throat. These lips are never present on originals and one of the very few absolutes that I know of when discussing reproductions. Original pieces show a rivet to the obverse side approximately 8 mm down from the throat opening. This rivet stands proud above the rest of the scabbard body and as a result, almost always exhibit paint loss. Scabbards were made in basically two shapes. The first has a round nose tip or snout and the second, a more pointed tip. Both of these types were used during the period and despite my best efforts I have never been able to correlate a given type to any one manufacture. My best guess is that there were a few different scabbard suppliers who on a contract by contract basis, provided scabbard blanks to different manufactures. These scabbards were assembled with one or two spring metal liners in order to keep the blade secure during wear. These springs were held in place by a rivet on each side. The first rivet I have already mentioned and the second rivet went through the hanger leather, the scabbard rear and finally secure the back liner in place. One little trick that the fakers have not picked up on yet is that many of these liners were covered with a coarse cotton. Liners without this cotton are often seen on original examples, however, I have never seen a repro with this cotton so it's a good sign of an original. Look at the leather hanger and keep in mind that these knives are seventy years old and as such, should display some natural wear and age. Smell the leather, 70 year old leather does not smell. If the leather smells new, question it. Look at the snap button. Often originals display interesting patterns, does it look used? 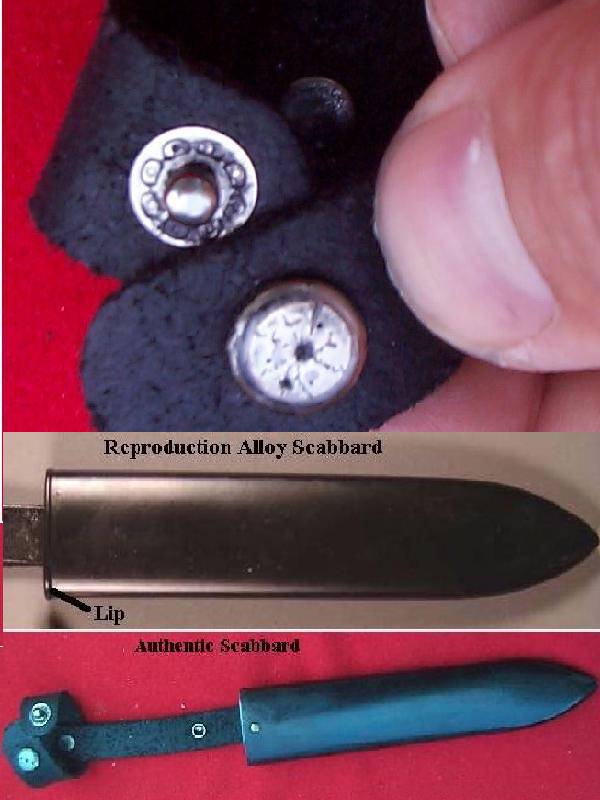 A wide assortment of blades were used and many variants exist. From 1933 to about 1936, before RZM began standardization manufacturing of these blades varied widely. The one feature seen that is a big red flag is the word "Germany" written anywhere on the blade. "Germany" was never written anywhere on any pre-1945 HJ knife or any other German dress dagger. Look at the basic blade shape, does the shape look the same as a known original? Is it sharpened? Does it look aged? Most repros look minty. Fakers usually don't go to the trouble of sharpening their blades. At least, not as roughly as a 10 year old would have in the 30's! Graying, clouding, and pitting take time and again, are not generally seen on fakes. A fingerprint stain can take 25 years to appear. Some knives were produced without a ricasso. This is not a sign of a reproduction. During this early period all knives were inscribed with the motto "Blut und Ehre!", transcribed Blood and honor. This inscription was etched not stamped. If you take your nail, not your finger, and run it along the inscription you should be able to feel the etch. Turn the blade over and the maker mark is usually marked approximately one quarter of the way up the blade from the crossguard. This generally states the makers name, logo, and location. In my experience, all blades with a motto will also have a stamped makers name and logo to the reverse. There may or may not be an RZM designation on the blade. After 1938, HJ production became more standardized as RZM influenced more control. All blades became uniform in shape with a ricasso. The motto no longer was applied to the obverse blade and all blades should exhibit an RZM stamp or etch, most often seen on the ricasso. All these blades were issued with a rather thick (approximately 2 to 3 mm) leather buffer pads seated against the crossguard.

When looking at a HJ hilt the first thing I look for is wear. Keep in mind these guys proudly wore their knives to all meetings. As a result, normal wear is seen on most of these pieces. The first place I look for wear is on the upper part of the hilt where the hanger strap rested on the pommel. Most original HJ's will show some wear and platting loss in this area. You just can't fake this normal wear. Look at the general shape of the hilt. Although the angle of the finger guard may vary by manufacturer, all these knives generally look right. I look for casting seams. Period knives were finished with typical fussy German care. Finding casting seams particularly around the finger guard is usually not seen on originals.

These grip plates were made of an black bakelite. This bakelite was cast in a checker pattern running approximately 45 degrees from the crossguards. There was generally some hand fitting involved in manufacturing. Far more than we are use to seeing today in our mass production world. These grip plates should follow the contours of the hilt and generally be fit well without rattling around.

Grip plates were secured to the hilt using brass, steel nickel plated or aluminum rivets. These rivets are what hold the whole knife together. They run through the grip plates, hilt and blade. Look for smooth dressed heads. The top of the heads may well display period wear as they sit proud of the grip. To the reverse these heads should be smooth and well rounded. The reverse of these rivets were peened over keeping the rivet in place. Despite this, the reverse rivet should appear relatively smooth and free from small individual taps. A rough un-professional finish to the reverse of these rivets are a clue that the knife may have been disassembled at some point often to it's determent.

The obverse plate had a cut out and inlaid with a HJ diamond. In my experience, the cutout in the grip plate generally does not follow the 45 degree pattern in the grip plate. These diamond inlays were quite involved. They were pinned from the reverse into the hilt. They were made in 3 sizes. The earliest ones were approximately 24mmx13mm (medium), the early ones were approximately 23mmx13mm (small) and the later RZM ones were approximately 25mmx15.5mm (large). Over time they generally loosened ever so slightly. Take the knife in your hand and reflect light off the diamond into your eyes and with your nail ever so gently put a bit of pressure on one corner of the diamond. You should see some movement. Although some diamonds will not move, most originals will. Look at the diamond itself, all the colors should be precisely separated. The red should display a translucent dot / fish scale pattern or rarer a solid red (c.1940). At the other two obtuse corners of the diamond is solid white enamel. Centered is a black swastika on a silver or bronze background. This bronze background is actually flecked or has a slightly sparkled look when observed under an eye-loop. When observed very closely, coming out from this bronze background are tiny lines running to the edges, separating the different color sections. Outlining the entire diamond inlay is a bronze border (approximately 1 mm) in width. Often the finish has aged to a black. Finally over the entire surface is an enamel coating giving the whole diamond a uniformed smooth look. Often this enamel will be damaged from time and wear. A nice diamond is always sought after and adds value to the knife.

Lastly, have an RZM code that you would like to determine the manufacturer? Here's a list of manufacturers sorted by RZM code.

In summary here is a quick checklist of clues to authenticity:

Buying from reputable sources on the internet provides lots of time to study your purchase and check it out well before committing so is preferable in many ways to shows. Auctions sites however have inherent risk. You don't know the person; there is no relationship. The only basis you have to complete a sale is a Web Site, User ID, or an email address. I have completed many thousands of online transactions and here are a few do's and don'ts. Yes, you will miss out on the odd deal but in general following these guidelines will save you grief. 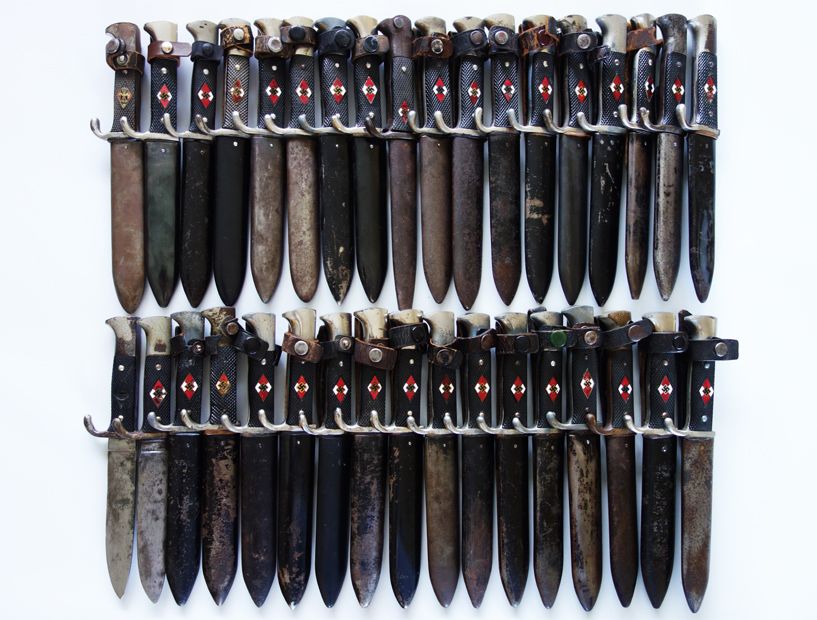