Here we have an Imperial 2nd Class Iron Cross 1914 and a ”Prizen Sized’ Spange to the Iron Cross 1939 by Wilhelm Deumer of Lüdenscheid. The Imperial Eisernes Kreuz 2. Klasse was reauthorized by Emperor Wilhelm II on 5 August 1914 and was for award to personnel who performed a single act of bravery in combat. The Spange 1939 zum Eisernen Kreuz 2. Klasse was awarded to individuals who has received the 2nd class Iron Cross in WWI and would have earned the 2nd Class Iron Cross in WWII. The 2nd Class Iron Cross is a multi-piece, die struck construction that has been soldered together. The single piece core is constructed out of an iron metal base that has been black enamel painted. The two piece frame is constructed out of a silver base that has been polished and a final protectant lacquer was applied over the entire award. The obverse features; a pattee style cross that has a centrally placed embossed “W” (cypher for King Wilhelm II), below a Kings crown (top arm) and above “1914” (lower arm ‐ institution date August 5th 1914), which is all on a black base and surrounded by a silvered ribbed/beaded row and a flat outlying border. The reverse shows a centrally placed three piece oak leaf and acorn cluster, below a “FW” (cypher for King Friedrich Wilhelm III) and a Kings crown and is above “1813”, and is all surrounded by that same border. 99%+ of the paint remains intact and the frame has a beautiful silver patina! To the top is a soldered on loop and ring that holds approximately 4 inches of stitched together black and white rayon ribbon. Attached to the ribbon is a Prizen size 2nd Class Spange. The 2nd Class Spange is constructed out of a die struck tombak base that has been silver washed. The obverse of the badge depicts a German national eagle, with out-stretched wings clutching a wreathed swastika within its talons and is above a trapezoid shaped pebbled bannered that reads “1939”. The full back reverse retains both soldered on flat wire tombak prongs. It continues to retain beautiful detail! Thre is a tombak dot on its head. The cross measures approximately 1 ¾ inches wide and tall. The Prizen Size Spange measures approximately 1 inch wide and tall. A beautiful assembly! 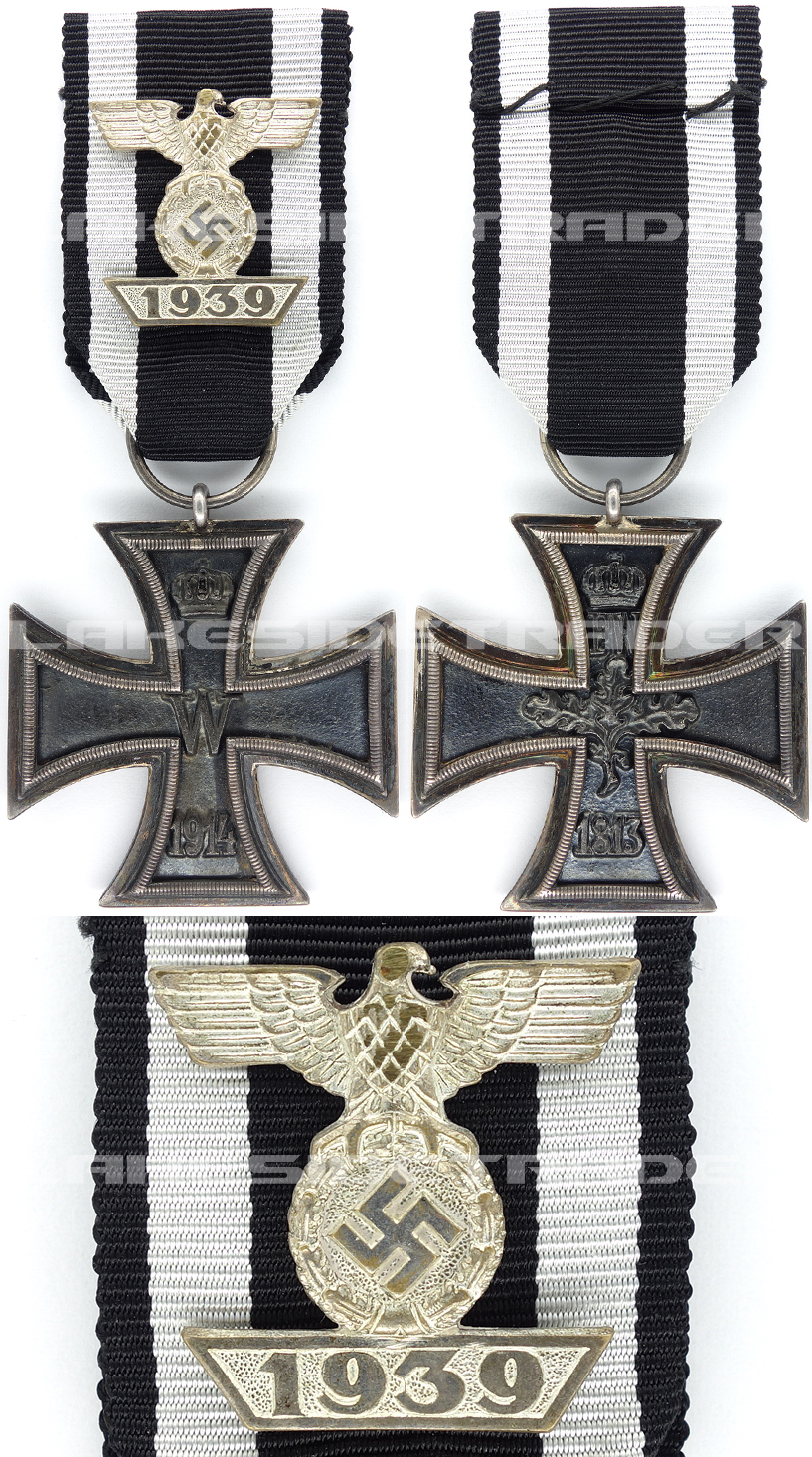