A Medaille für den Italienisch-Deutschen Feldzug in Afrika by Lorioli of Milano. Awarded to soldiers of the Wehrmacht and Italian troops who worked together in the North African theater of war. It is constructed out of a die struck bronze base that has been bronze washed and finished in a lacquer coating. The obverse of the award features two gladiators fighting together to keep a crocodiles jaws closed. Beside the gladiators it is maker marked “Lorioli Milano” and to the bottom outer rim it is designer marked: “De Marchis”. The reverse features the Arch of Fileni, above the Savoy knot and inside of a fasces (left) and a static swastika (right), which is all surrounded by “Campagna Italo Tedesca in Africa - Italienisch Deutscher Feldzug in Afrika” (Medal for the Italian-German campaign in Africa (in both German and Italian)). There is no ribbon. It shows beautiful detail and bronze wash with a few odd scratches. It measures approximately 1 3/16 inches in diameter. A great Axis award! Now I must let you know a little bit more about these just because I find them so fascinating! This award was originally considered a foreign award, designed by the Italians (De Marchis) for the Italians, yet Germany ended up approving this award for official use prior to the Italians. Despite being incorrect, many of the Germans used the reverse of the medal as the front. So not only did the Germans use the award meant for Italians, but they made it official before them and wore it whichever way they pleased! Too funny if you ask me! 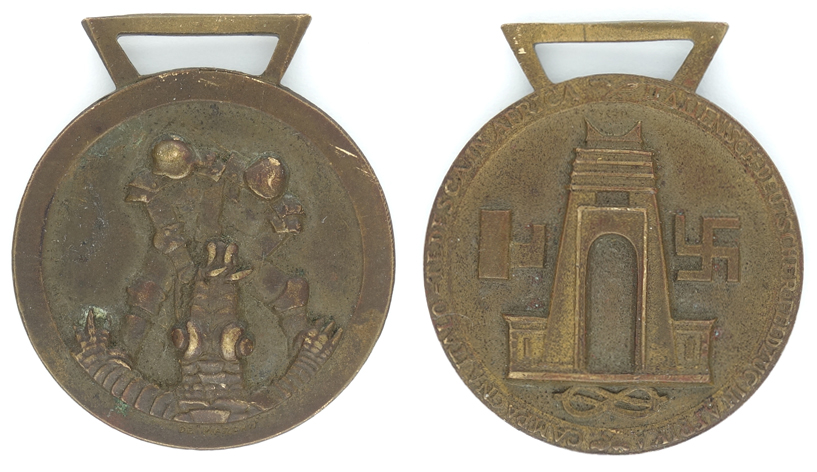